Frank Darling, one of Toronto’s most  renowned architects of the early 20th century, designed Convocation Hall in the classical style of ancient Greece, echoing the historic foundations of higher learning. The circular structure was conceived to be the geographic and metaphorical centre of the university, providing a focal point to unify the growing campus. 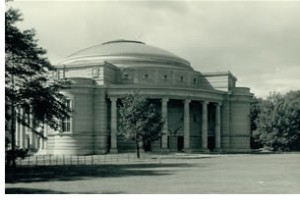 It’s doubtful whether Darling would have imagined, as he drew up his architectural plans, that the campus would eventually grow so large that individual classes would fill Con Hall’s 1,730-seat auditorium. In fact, when the building was completed in 1907, fewer than 4,000 students attended U of T. Were Darling alive today, he might also be surprised to learn that today’s U of T students come from around the world, speak dozens of different languages and study a huge variety of subjects on three campuses.

But what these students have in common – as did students in Darling’s day – is a love of learning, and the chance to walk across the dais under the great domed roof of Con Hall on graduation day. To mark Convocation Hall’s 100th anniversary, we sought out the stories of families that have sent multiple generations to U of T. Their experiences may be different, but they’ve all shared the fleeting thrill of striding across the stage at Con Hall, diploma in hand.

The Cringans
The Cringan family’s association with U of T starts with Alexander Thom Cringan, who was both student and teacher here. Educated in music in London, England, A.T. Cringan moved to Toronto in 1886 and became the music director for the Toronto Board of Education. Then in 1899, he earned his bachelor of music at  U of T. Cringan is best known for his groundbreaking work recording and transcribing the music of the Iroquois in Ontario. Among the earliest ethnomusicology research performed in Canada, Cringan’s wax cylinders and tapes, recorded between 1897 and 1902, are kept today at the Canadian Museum of Civilization.

Of Cringan’s 11 children, one son and eight daughters attended U of T. “He was a firm believer that women as well as men should have an equal opportunity to pursue an educational and professional life,” says Alex Cringan, A. T. Cringan’s grandson and a 1948 graduate of U of T’s forestry program. The family made the most of the opportunity to attend U of T, and went on to careers in teaching, music and medicine. A.T. Cringan’s eldest daughter, Lillias Waugh Cringan, was the one of the first women to practise radiology in Canada.

With so many Cringans preceding him to U of T, Walter Cringan (BSc 1976 Victoria) reports that it hardly occurred to him that he could go elsewhere. “It never really entered my mind,” he says. Now, Walter’s daughter Sarah is following in the family’s footsteps and has just completed her second year of a bachelor of music at U of T. She plays the French horn. “I knew a couple of family members went here,” she says, “but I didn’t know to what extent.” Sarah isn’t quite sure what her longterm ambitions are yet but says she’s thinking about teaching, just like her great-great-grandfather, A. T. Cringan.

The Angelos
Wendy Angelo’s faculty no longer exists, and the building where she went to class is now a clothing boutique. Still, she feels at home on the U of T campus. “So many things have changed,” she says. “And yet, you feel like you belong there. You don’t feel like an outsider when you go back.”

Angelo (BSc 1975 Woodsworth) started her studies in the Faculty of Food Science in 1969, when it occupied the Lillian Massey Department of Household Science building at the corner of Queen’s Park and Bloor Street West. Although she enjoyed her studies, her heart had been set on attending the University of Guelph for its well-regarded food science program.

But because Angelo was the oldest of three sisters – and their father was determined that each would receive a university education – going away to school would have been too expensive. In the end, she says, she grew to love U of T, where both her father and grandfather had attended. Today, Angelo teaches high-school family studies and food science. The family has worked in the food business for generations.

Angelo’s grandfather, Wilmot Alvin Davidson, received both his bachelor’s and master’s degrees in chemistry from U of T prior to the First World War, and spent his career with the Canadian government researching food safety. Wilmot’s son Kenneth Davidson (Angelo’s father) worked at General Food (today known as Kraft), negotiating labour agreements. He completed his business diploma part time while working at the company and graduated in 1951.

“He and my mom had been married just before he went overseas in the Second World War,” says Angelo. “He came back very gung-ho about university, but ended up having to do it part time because he had a job and a wife and three children in quick succession.” As a young girl, Angelo recalls her father coming home from work and locking himself upstairs to study for the night. “He was a big supporter of U of T,” says Angelo, who, along with her sisters, Judith and Carolyn, entered U of T in rapid succession.

In June 2006, Angelo watched her son, Peter, cross the stage at Convocation Hall to collect his bachelor’s degree in chemical engineering and applied chemistry. Peter is now earning a master’s degree at U of T and working on a novel way to coat paper with electronic films. “It’s almost a hundred years since my grandfather graduated,” she says, “so it’s pretty neat that we all ended up in the same place.”

The Kings
So far, four consecutive generations of the King family have graduated from the University of Toronto medical school, although the family association with U of T actually stretches back much further – to before Confederation. John King earned his master’s degree from U of T in 1865 and his law degree three years later. His eldest son, William Lyon Mackenzie King, attended U of T and later became Canada’s longest-serving prime minister. His youngest son, Dougall Macdougall King, studied medicine at the University of Toronto and served as a medic in the Boer War in 1902.

A passion for medicine runs in the family, but so did tragedy. “My husband’s father, Dougall, never lived to practise,” says Margery King. She met her husband, William, at the University of Toronto in 1934 while pursuing a master’s degree in psychology. “Dougall died when my husband was only nine, and my husband died when our son was three. So I think, to some extent, they were all carrying on the tradition of studying medicine because their father had.” Margery’s son, William, received his medical degree from  U of T in 1965, and his son, Nelson, followed in his footsteps, graduating from medicine in 1991.

Last fall, Margery King’s great-granddaughter, Sarah, began her first year at the University of Toronto, the sixth generation of her family to do so. It’s a fine family tradition, but some things aren’t like they used to be. “The cost!” says Margery King with a laugh. “When I was doing my master’s degree between 1934 and 1936, I think the fee was $125 per year, and I worked as an assistant marking papers for $200 a year. So things have changed in more ways than one.”

The Larratt-Smiths
While pursuing an MBA at the Rotman School of Management in the 1970s, Hugh Larratt-Smith didn’t have to stray very far from St. George Street to see concrete evidence of his family’s historical connection with  U of T. A portrait of his great-great-grandfather, Larratt Smith, a former vice-chancellor of the university, hangs in Croft Chapter House at University College.

Larratt Smith trained as a lawyer in the 1840s at what was then King’s College, but he was an entrepreneur at heart. He landed a senior role at Consumers Gas Company and became a wealthy Upper Canada businessman. His home was a 30- room mansion on a sprawling Summerhill estate, where he lived with his second wife and 12 children.

Hugh Larratt-Smith recalls his ancestor’s portrait on campus as being a powerful reminder of the importance of education. “His family had not been well off, and he felt that his U of T degree had been a springboard to a successful career,” says Hugh.

One of Larratt Smith’s seven sons, Goldwin Larratt Smith, graduated from U of T with an MA in 1890 and later joined the family law firm Smith, Rae and Greer. Goldwin’s son Bethune Larratt Smith extended the tradition of family lawyers into a third generation. Another of Goldwin’s sons, Anthony, studied at U of T, but was killed in the Second World War. His name is inscribed at Soldiers’ Tower.

The string of Smith family lawyers ended with Hugh’s father, Michael Larratt Smith, who left U of T’s Faculty of Applied Science and Engineering in the late 1940s, before earning his degree. Hugh’s mother, Joan Eliot, earned a BA in 1951.

Hugh’s sister, Diana MacNeil (BA 1980 Victoria) and her husband John MacNeil (BA 1981 Victoria) have a son, Michael, who will be starting second year of mechanical engineering this fall. If he wants, he can visit the portrait of his great-great-great-grandfather, which still hangs in Croft Chapter House. Or, he can read a book about him: Young Mr. Smith in Upper Canada (University of Toronto Press), based on the diaries that Larratt Smith kept for 70 years, is in the stacks at Robarts Library.

The Goldrings
The Goldring family means business. Warren Goldring (BA 1949 University College, LLD Hon. 2003) is co-founder of the investment firm, AGF Management. His son Blake (BA 198 Victoria) is chairman and CEO of AGF. And Warren’s daughter Judy (BA 1988 Victoria) is the company’s general counsel and senior vice-president, law and corporate affairs. In all, four out of Warren Goldring’s five children attended U of T.

The Goldrings’ first connection to the university was Cecil Charles Goldring, Warren’s father, who earned his bachelor’s, master’s and doctor of pedagogy degrees from U of T. “In those days, you scrambled for your education,” says Warren. “My father spent very little time in the way you or I might have during university. While he was taking courses, he worked the whole time.” C. C. Goldring became the first superintendent of schools, and then the director of education, for the City of Toronto. Cecil Goldring’s brother, Leslie, also received his doctor of pedagogy degree from U of T and taught in Toronto’s school board.

Warren Goldring attended U of T “along with thousands of ex-servicemen who were much older and wiser than I was,” he says. After fighting abroad, the veterans of the Second World War were determined to get their education, and Goldring describes the atmosphere at U of T during that time as intensely serious. “I was a young student compared to these much more mature people,” Goldring says. “And I think I got a better education as a result of it.”

Warren Goldring’s children Jill (BA 1979 Victoria, MLS 1989) and Bryce (BA 1987 UTSC) also attended  U of T, but daughter Jane bucked family tradition by attending the University of Western Ontario. However, Jane’s eldest daughter, Caitlin, is now in her third year of her studies at – where else – U of T.

Graham F. Scott is a freelance writer in Toronto. His aunt, Barbara Wickens, graduated from U of T in 1976.