Put all of the university’s tech-savvy students and researchers in a fully wired building with up-to-the minute equipment, then watch what happens. This is the approach of the Bahen Centre for Information Technology. 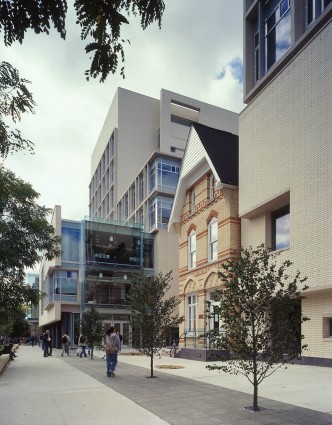 The Bahen Centre allows the university to increase enrolment and attract top professors to all of its IT-related programs, a task made much easier by the building’s impressive look and research capacity. “When potential recruits come and see such a facility here, they realize that we are committed to research in this area,” says Venetsanopoulos.

Funding for the building came from a mix of federal and provincial grants and substantial alumni donations. Lead donors include John (BASc 1954, DEng Hon. 1999) and Margaret Bahen (Dip Occupational Therapy 1952); Jeffrey Skoll (BASc 1987, LLD Hon. 2003); and Lee (BASc 1977, MEng 1982) and Margaret Lau. Fundraising efforts will continue to furnish and equip the dozens of classrooms and labs in the building.

Diamond and Schmitt Architects Inc. of Toronto won several accolades for the centre’s design, including an Ontario Association of Architects 2003 Architectural Excellence Award. The team faced diverse challenges, such as incorporating the complex infrastructure of high-tech labs into the design while weaving the modern structure into and around neighbouring heritage buildings, says Thom Pratt, the associate in charge of the project.

Most of the teaching facilities are clustered on the lower floors to ensure a quiet environment for research on the upper levels. The main floor, which is dominated by a three-storey atrium, is used as a central plaza. The building’s north end features a five-storey glass pavilion, and the south end includes a landscaped quadrangle. Energy-efficient strategies – including a system to retain and recycle storm water, low water-consumption plumbing and sun-shading devices on the building’s exterior – influenced many aspects of the design.