At 83, Richard Iorweth Thorman (BCom 1952 VIC) is too young to have served in the Second World War, but he believes strongly in educating young people about Canada’s military history. No wonder he stepped up when he heard that the Canadian War Museum wanted to restore a tank that played an important role in the war. While he won’t reveal the exact figure he donated, “It wasn’t cheap!” he admits.

The six-ton M1917 tank is rare today – there are only two left in Canada and 19 in the world, says Thorman – but in 1917, it was the first tank to be mass-produced in the United States. It never saw combat, arriving in France after the armistice. But in 1940, the tanks had a revival when Canada bought 250 for troop training.

What’s more, the M1917 set the pattern for today’s 45-ton behemoths. “It was the very first tank that had the rotating turret at the top, the engine at the back and the people compartment in the front,” says Thorman. “And that’s exactly the way they build tanks today.”

For years, Thorman’s tank had been used to haul logs for a forestry company in Bracebridge, Ontario. The original transmission and turret were long since gone. Holes had been drilled to accommodate logging gear. Using the vehicle’s original plans, the museum worked with a defence manufacturer in Ottawa to rebuild the missing parts, while staff and volunteers helped restore what had survived.

Thorman served as an Air Cadet at age 13 in 1942, and later, at U of T, earned his commission in the artillery through the Canadian Officer Training Corps. His academic classes included many war veterans. “I was definitely old enough to never forget those who had fought for Canada and the freedoms we believe in,” he says.

And there are many ways to serve your country. Thorman’s own philanthropic efforts, which have also included founding scholarships and bursaries at U of T, were rewarded in the fall with a Queen Elizabeth II Diamond Jubilee Medal.

Please click on the image to view the slideshow with captions 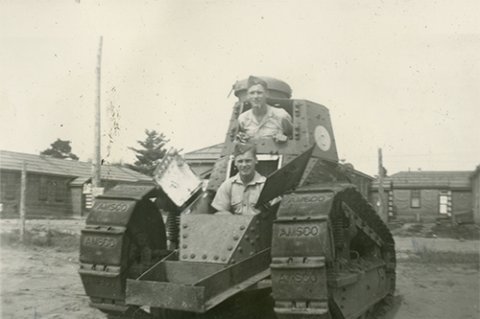