The University of Toronto isn’t just Canada’s biggest university, or one that regularly scores highly on prestigious university rankings. When we delved into the records that U of T and its community members hold – Canadian bests, world firsts, campus biggests or oldests or even hottests – we uncovered a picture of a place bursting with creativity, tradition and personality. It’s enough to give Guinness a run for it’s money. Check out all four categories: Arts, Science, People & and Places & Programs. 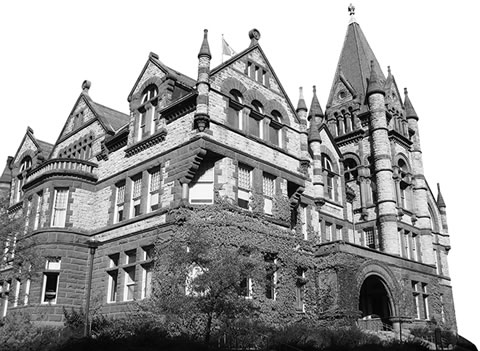 College with the Most Nobel Prize Winners
Out of U of T’s eight Nobel Prize-winners, both Lester B. Pearson (BA 1919) and Arthur Schawlow (BA 1941, MSc 1942, PhD 1949) were Victoria grads. Pearson won the Nobel Prize for Peace in 1957 for helping resolve the Suez Crisis while Schawlow was one of three co-winners of the 1981 Nobel Prize in Physics, awarded for the development of laser spectroscopy.

Most Decorated Sports Team
The Varsity Blues men’s swimming team has taken 62 provincial titles since 1920 and is the current champ.

Oldest Student Club
The Trinity Debating Society – The Lit – is also the oldest debating club in Canada. It was founded in 1846. While traditions remain writ large (they have a mace!), the group doesn’t take itself too seriously. “In the earliest days, and again since about the 1960s, we’ve only done joke debates,” explains Christopher Hogendoorn (BA 2014 Trinity), the club’s 2013–2014 “Prime Minister.” Notable alumni include columnist Andrew Coyne (BA 1983 Trinity) and videojournalist Hannah Sung (BA 2000 Trinity). 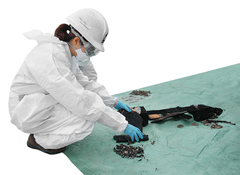 First Canadian University Program in Forensic Science
Torontonians who want to be a reallife Gil Grissom (the star of TV’s CSI) don’t have to leave home – U of T Mississauga has offered a BSc in forensic science since 1995, the first Canadian university to do so. The department’s Forensic Crime Scene House may just be the university’s scariest classroom too!

Newest Degree
In 2014, engineering graduate students can enrol for the first time for an MEngCEM – a Master of Engineering in Cities Engineering and Management degree. The 16-month MEng option includes a chance to solve a real-life urban management problem.

Oldest Building
At least 159 years old, but it depends how you measure.
The Louis B. Stewart Observatory at 12 Hart House Circle (left) is built with the oldest stones on campus – it was erected in 1908 from the parts of the old observatory, first built in 1855.
University College (centre), under construction from 1856 to 1859 (but in use from 1858) and considered the oldest building at U of T by the university Facilities Department.
St. Basil’s Church and Odette Hall in St. Michael’s College (right), built between 1853 and 1855 and in continuous academic use ever since. St. Mike’s affiliated with the= university in 1881.

Most Evironmentally Efficient Building
The Exam Centre on the St. George campus, retrofitted from an existing warehouse in 2008, was U of T’s first LEED Gold Certified Project. Sustainable designs and technologies reduce the building’s electricity consumption by 15 per cent and water use by 60 per cent compared to a similar building using standard technologies. In 2009, UTM achieved its first LEED Gold rating with the renovated third floor of the William G. Davis Building. UTSC’s Pan Am Centre, under construction, will be submitted for LEED Gold certification.