It is not every day that you see the visage of a famous Christian evangelist on your empty dish. But if you had eaten from this “love plate,” the profile of Rev. John Wesley, co-founder of the Methodist Church in England, would have eventually emerged. The fragile love plate was created to celebrate the centenary of Wesleyan Methodism in 1839. Part of the Wesleyana Collection in the United Church/Victoria University Archives, it is adorned with one of Wesley’s well-known maxims: “The world is my parish.” 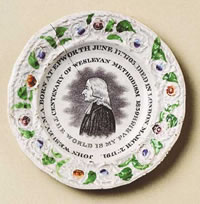 The Reverend was noted for his exquisite turns of phrase: at the age of five he was rescued from the flames engulfing his father’s rectory in Epworth, England, an event so dreadful (and so rife with symbolism) that for the rest of his life Wesley referred to himself as a “brand plucked from the burning.” The porcelain plates were used during the love feast or agape (pronounced a-ga-pay), a celebration of prayers, hymns, blessings and offerings [to the poor. Wesley introduced the service, which was performed once every season, into the Methodist religion. Despite extreme opposition, this Protestant denomination emphasized evangelism, the rights of women to preach and highly personal worship experiences. To distinguish the love-feast ceremony from a communion service, plain white cake or bread was portioned onto a love plate, and a loving (what else?) cup filled with water was provided to wash it all down. In 1925, when the Methodist Church, Congregational Churches of Canada and approximately 70 per cent of the Presbyterian Church of Canada amalgamated to form the United Church of Canada, the love feast, alas, was discontinued.