When Eric Jackman made Canada’s biggest-ever private donation to early childhood development last year – a $5-million gift to the Institute of Child Study, which now bears his name – he was hoping to make a point. How we spend our early childhood, he believes, helps determine how we spend the rest of our lives. “We know more and more about the extraordinary importance of infancy and childhood to getting people off on the right start in life,” he says. “I wanted to shine a spotlight on that.” 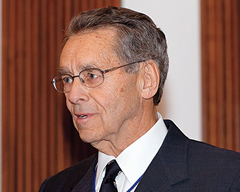 Jackman has long been interested in early childhood development. He earned his undergraduate degree in economics and tried his hand in the investment business, which he describes as “not satisfying for my soul.” Then, while travelling – and experiencing the cultures of Asia, the Middle East and Europe – he became fascinated with how people live. He went back to U of T for his master’s in psychology, earning his degree in 1962. But here in Canada at the time, rat mazes and pigeons pecking at dots were all the rage in psychology, he laments, and he wasn’t terribly interested in that. So he set off to the University of Chicago, where, through the university’s Committee on Human Development, he studied psychology, cultural anthropology, sociology and biology, becoming a “human developmentologist.” He later practiced in Chicago as a clinical psychologist, both in the mental-health system and in private practice.

Though Jackman eventually migrated back to the world of finance, where he currently runs Invicta Investments, he’s kept his oar in psychology through philanthropy and volunteer work with organizations such as the Psychology Foundation of Canada. “That organization chose some years ago to not get involved in cures,” he says. Instead it focused on prevention and health promotion, an approach championed by U of T’s proposed Institute for Human Development, and by Jackman himself. “We have to start kids off as happy, resilient, energetic, motivated people, who understand their mind, their body and their soul,” he says.

Jackman’s own early education, and that of his siblings, began at the Institute of Child Study, which at the time was called St. George’s School for Child Study. He still remembers the tricycles, the little sidewalks and the sandboxes. “The thing I didn’t like was naptime!” he laughs. “I wanted to play!”

Prof. Janette Pelletier, director of the Dr. Eric Jackman Institute of Child Study, says Jackman’s gift – and a $3-million contribution from Margaret McCain and the late Wallace McCain – will support building expansion and renovation, enhance community programming, and ultimately position U of T as a global centre of excellence in early human development. (Margaret McCain, a long-time children’s advocate, earned a bachelor’s degree in social work from U of T in 1955. She co-wrote a report for the Ontario government in 1999 that underscored the importance of life’s first three years.)

The institute’s new wing – the Margaret and Wallace McCain Pavilion – will feature modern classrooms and a large auditorium-gymnasium to better serve the Jackman Institute’s onsite graduate program. The addition will also allow research activities in the Dr. R.G.N. Laidlaw Centre to expand, and it will provide much-needed space to strengthen physical activity and health programming for the laboratory school students in Nursery through Grade Six. The Dr. Eric Jackman Institute is one of the few places in the world where research, graduate teacher training and an elementary laboratory school occur in one place. It is seeking another $1 million to complete its fundraising campaign.