We asked alumni to share tales of spooky encounters they had while attending U of T. You can send us your own tale of a haunted campus by email to uoft.magazine@utoronto.ca, and we’ll add it here! 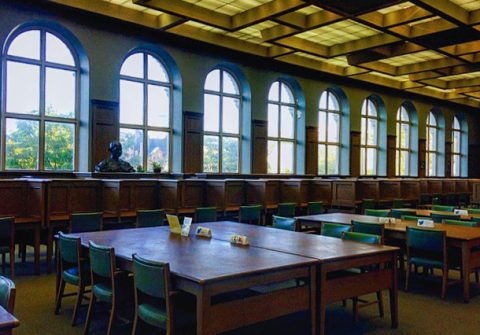 For a year in the early 1980s, I served as an overnight watchman at University College. Colleagues warned me that UC was haunted, and I remember noticing soon after I started that locked doors sometimes became mysteriously unlocked. I didn’t give these isolated instances much thought, until a couple of things happened that I still cannot explain.

I showed up for duty one fall evening around 6. As I entered the college, I noticed sheets of insulation stacked neatly against the wall, outside a classroom. Construction workers were using the room as their office during a renovation. The sheets weighed about 80 pounds each and there were about 10 in the pile. Stretching on my tip-toes, I could barely reach the top of the stack.

At around 4 a.m., I was in the classroom when I heard a crash outside the door. I rushed into the corridor and there, lying on the floor, was one of the sheets of insulation. It was as if some unknown force had picked it off the top of the pile and dropped it on the floor. I called the U of T police, who sent over an officer to check for an intruder. We went through the building and could not find any evidence of forced entry into the building. UC was securely locked.

About six months later, I was working a Saturday evening shift. Students held a regular pub night in the basement of Laidlaw Library, but at about 1:30 a.m., I noticed that the library was in complete darkness; the pub had ended. At about 4 a.m., I looked up from a book I was reading, gazed out the window, and was alarmed to see that all three floors of Laidlaw library were lit-up like a Roman candle. I called U of T police and advised them that a break-in was in progress. Two officers arrived within minutes and searched the library for half an hour. Neither of the library’s two entrances showed any signs of forced entry. I wondered if the librarian had inadvertently set the light-timer incorrectly when he left for the weekend. The officers agreed that it was a plausible theory, except that the library was not equipped with a light-timer. “It must be the ghost,” they said, leaving me to ponder the mystery on my own. 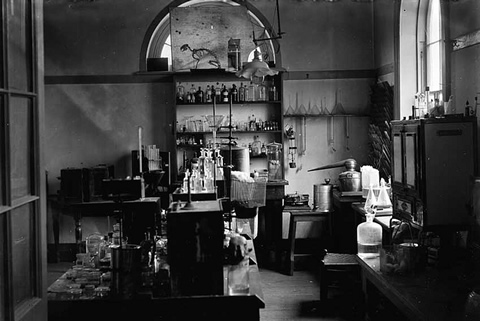 I was a first-year engineering student, my lab partner and I were working on an electronics assignment in one of the old labs in the Wallberg Building. We were having some trouble with a circuit we’d been asked to build and analyze, and we were scratching our heads over what should have been a very simple problem to fix. Eventually, we noticed a man watching us.

He wasn’t the course professor, and he wasn’t one of the lab technicians or tutors. He asked us what was wrong, and we told him we didn’t know. We had built the circuit exactly as described, but it was not behaving as expected.

The mysterious man told us to double-check our wires because they sometimes break. We took his advice and soon found that, indeed, there was a broken wire. We replaced it and completed the assignment.

We turned to thank him, but he was no longer there. Surprised, we asked the other people in the lab where the man had gone. No one else could remember seeing anyone who matched his description. Neither of us saw this man again during our time at the university.

Maybe he was an older professor who had retired or moved on. Or perhaps he was Emil Wallberg himself, helping out a couple of frosh in the building that had been named after him so long ago. (Insert spooky music here.)

The Ghost in the Cellar 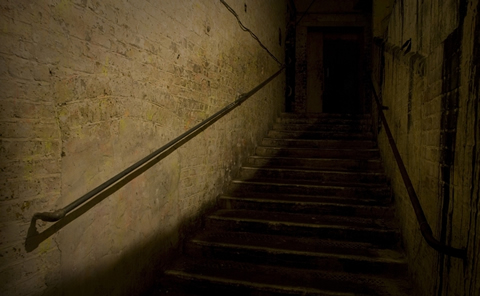 Throughout teachers’ college, I was fortunate to have a room in the “Christie Mansion.” The abode was every girl’s dream house: pink bricks with cream trim, arching entryways, spiral staircases, marble floors and plush red carpets. There were even mysterious closets and secret passages.

At times, though, the house seemed haunted. I remember many nights lying in bed, half-awake, listening to odd creakings and distant scufflings coming from behind the walls and floorboards. I convinced myself that there was nothing to fear – until Halloween 2005.

It was nearly midnight when I slipped into bed. As I was drifting off, I recalled how one of my upstairs housemates habitually held her breath and ran past the doorway to the mansion’s musty basement. She had persuaded several of her floor mates — and had tried to persuade me — that the basement was undeniably haunted. Not one of them would dare venture down those dark, aged stairs, for any reason.

Suddenly, in the silence, I heard an eerie, high-pitched, rhythmical grinding sound. It stopped. I lay very still. Then, I heard it again. It lasted a little longer this time. Was that sound coming from the basement? I listened closer. The sound returned a second and then a third time. I sat bolt upright in bed, threw back the covers, grabbed my glasses and emergency flashlight, put on my shower shoes and slipped into the hall.

My room was on the first floor, so it was a short walk to the dark, doorless portal to the basement. Every so often I would pause and listen, the folds of my nightgown swishing around me. The sound was still there.

My heart pounded as I craned my neck around the door frame and cast my gaze down. What I saw astonished me. Past the landing at the bottom of the stairs was a concrete wall and a door. All was black — there were no light fixtures, not even a hanging bulb. However, from the base of that tarnished, prison-like door a single sliver of light crept into the shadows.

I very quietly began down the stairs, halting after each step. All of my housemates’ stories and their warnings echoed in my ears. The rickety wood staircase groaned under the pressure of my feet. In my right hand I clutched the flashlight like a sword, in my left, the splintered railing. The noises — the same noises that I had heard in bed — grew louder.

I reached the landing. Breathing fast, I stretched out my hands, my hair wild about me, and groped through the inky blackness toward the mysterious door. Thick dread thrilled through my veins. I leaned in close with my right ear toward the door and heard something. I heard voices. From the other side of the door.

I froze. People were not supposed to be down here. There were no rooms; the area had been used for storage but had long been abandoned. Rumour had it that the cellar had once served as some form of prison. Transfixed with fear, I slowly reached out my hand, grasped the rounded brass knob, turned it, and pushed.

Light flooded into the landing, temporarily blinding me. I blinked several times, amazed at what I saw. There, hunched over a table with her back to the door, was a girl – and her parents. The girl’s long black tresses swished as she turned her head toward me. It was then that I realized that she was a girl from my residence. On the table where she was labouring, and had been labouring for some time, probably hours, spread out in bits and pieces, was an architecture project due the following day. The squealing came to an abrupt halt as her father cut the power to the hand-saw that he was using to make a miniature wooden house-frame.

So, The Mystery of the Haunted Cellar was finally explained. However, I have always had a funny feeling about the private piano room.