It’s unanimous: U of T takes first place in Canada, and is cited as one of the top publicly funded universities worldwide, in five of the most prestigious international university rankings. The Times Higher Education report ranked U of T first in Canada for the eighth year in a row – and 22nd out of 1,000 globally.

“We’re proud the University of Toronto has once again been named one of the top global universities, which demonstrates the tremendous impact of our research and our world-­class performance in teaching,” says Prof. Vivek Goel, U of T’s vice-­president of research and innovation.

U of T also rated highly in the Shanghai Subjects Ranking, with top-25 placements in 25 different subject areas – including second in the world in psychology research. 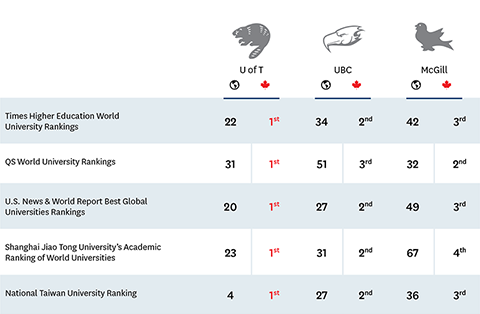 In the 2017 National Taiwan University Ranking, U of T remains the world’s top public university for the fourth year on account of its research excellence in a wide range of disciplines.