The University of Toronto isn’t just Canada’s biggest university, or one that regularly scores highly on prestigious university rankings. When we delved into the records that U of T and its community members hold – Canadian bests, world firsts, campus biggests or oldests or even hottests – we uncovered a picture of a place bursting with creativity, tradition and personality. It’s enough to give Guinness a run for it’s money. Check out all four categories: Arts, Science, People and Places & Programs.

First Woman to Swim the English Channel Nonstop Both Ways
Cindy Nicholas (BSc 1979 UTSC) completed the feat in 19 hours and 55 minutes (also setting a speed record) in 1977. In total, she did five double crossings (another record) and 19 solo crossings, earning the nick- name “Queen of the English Channel.”

Longest-serving U of T President
The university’s fifth president, Sir Robert Falconer, served for 25 years, from 1907 to 1932. He saw the university through a building boom (including the original Varsity Stadium) and the trauma of the First World War (and the innovation and research expansion it provoked).

Most Olympic Medals
Jayna Hefford (BPHE 2004) won four golds and a silver as part of the Canadian women’s Olympic hockey team in five consecutive Winter Games, from 1998 to 2014. 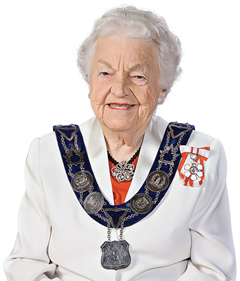 Oldest Living Person to Receive an Honorary Degree
In June 2010, at the age of 89, Mayor Hazel McCallion received an honorary degree in recognition of her leadership of Mississauga since 1978 and for her work with Hazel’s Hope, a World Vision charity that helps children affected by HIV-AIDS in
Tanzania.

Oldest Student Ever
Selma Plaut didn’t actually know her birthdate – it was some time around 1890, in western Germany. She emigrated in 1939 and starting at age 88, she completed 11 courses at U of T. On June 11, 1990, around the age of 100, she received an honorary BA at Convocation Hall. The oldest graduate is Saul Goldstein, who earned a BSc (Woods-worth) in 2004 at the age of 93.

Biggest Whiskers
Where to begin when it comes to impressively hirsute chins? U of T’s Victorian and Edwardian profs were masters of pogonology. Our favourite bearded portrait is that of James Mavor (left, 1854–1925), a political economics professor who also founded the Hart House Chess Club. Moustache honours are definitely due to James Willmott (DDS 1893) (1837–1915), dean of dentistry in the early 20th century. Click here to see U of T’s top 10 in facial hair.

Note: An earlier version of this article stated that Hazel McCallion and Craig Kielburger are the oldest and youngest person, respectively, ever to have received an honorary degree. In fact, they are the oldest living and youngest living person, respectively, to have received one from U of T’s Governing Council. This does not include honorary degrees awarded by U of T’s federated colleges, or those associated with the Toronto School of Theology.