Conan Tobias (BA 1994) is the man behind Taddle Creek – the eclectic literary mag that publishes a mix of non-fiction, fiction, poetry and art. The mag is celebrating its 20th anniversary this year. Kerry Clare talks to Tobias – founder, editor-in-chief, publisher and art director – about Taddle Creek’s humble beginnings, his nitpicky love of fact-checking and his enduring passion for comics.

Taddle Creek started out with a Toronto focus, but has expanded to cover all of Canada and beyond. I was surprised to learn that you aren’t originally from Toronto …
Well, most people aren’t from Toronto. I’m from Saint John, New Brunswick, and moved here in 1991 to go to U of T. I worked at the Varsity for three years. I also worked on the literary journal Acta Victoriana at Vic, which was actually what inspired Taddle Creek. Taddle Creek began as small as it possibly could, an annual magazine for a small Toronto neighbourhood – the Annex – so there was nowhere to go but up. I started at a time when it was still possible to get a lot of advertising, so that helped a lot, and then grants came along, and the Internet and social media made it easier to reach people. It grew naturally, with a lot of hard work.

What’s been the key to keeping Taddle Creek going for 20 years?
I enjoy doing it and so it’s gone on this long because I want to keep doing it. When you’re a small magazine, there’s no money and it’s hard to keep it going. I do almost everything on it. There are other people who work on it, but no staff per se. If I had to pay people to do even half of what I do, we wouldn’t be in business. It’s my enjoyment of it and my desire to keep doing it. 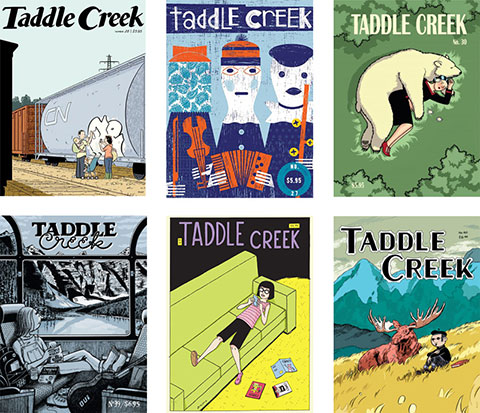 At U of T you were an English major, but Taddle Creek has such a strong visual aesthetic. Do you have an art background as well?
When I started at my college paper, the only position open was art director, and I later became art director of the Varsity. I’d worked on a paper in high school during the early days of desktop publishing, so I could fake it and I learned quickly. At Taddle Creek, I design the magazine – I’m not a professional art director by any means, but it’s something I enjoy. I talk to a lot of cartoonists and artists for Taddle Creek articles. I read comic books as a kid – and I still do. Artists can be interesting people, good to talk to and they have great back stories.

Two of your passions are proper grammar and factual accuracy. In fact, you’re the author and editor of The Taddle Creek Guidebook to Fact-Checking Fiction. What is the experience of being an adherer to factual accuracy in 2017?
There’s certainly a lot of sloppiness and “fake news” going on, but at the same time sane people are more interested in and energized about factual accuracy. When you see the uptick in subscriptions to the New York Times, the New Yorker and the Atlantic, I think it shows that people are interested in good, strong accurate journalism again. So while I don’t like seeing fake stuff, I do think that many people are caring more. I’m hoping that will win the day.