Lee Tseng (BA 2002 Trinity) is creating American style craft beer with an Asian twist . . . in Shanghai. But getting there has been an adventure. Tseng describes the city as a Wild West – opportunity abounds since everything “operates in the grey, not black and white.” 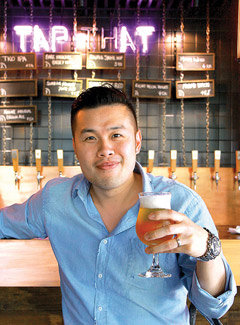 The ability to adjust and adapt quickly is something Tseng honed in university. “At Trinity College it’s survival of the fittest,” he says. “The professors aren’t there to hold your hand, so you’ve got to figure it out for yourself.”

In the spring of 2008, Tseng opened Boxing Cat brewery, in Shanghai. The pub and brewery created some of China’s first craft beers infused with local ingredients such as kaffir lime leaves, mangoes and Yunan tea. He and his original partners Kelley Ming Lee (a chef from California) and the late Gary Hyne (a Texan brewmaster) suffered an early setback when their main clientele – American expats – started to leave the city after the October 2008 financial crisis. But when they tried opening a new brewpub in June 2009 in Shanghai’s trendy Yong Fu district, downtowners flocked to the bar.

Unlike some microbreweries in China, Boxing Cat doesn’t dumb down the hoppy bitterness or roasty edge of its award-winning brews in an effort to win over craft beer newbies. That unwavering focus on flavour has won Boxing Cat equal numbers of expat and Shanghainese imbibers – and made many of their brews top the “best beers of China” list found at beer-nerd mecca, ratebeer.com.

After opening a second pub with new head brewmaster Michael Jordan in 2010, this spring Tseng launched a third – Liquid Laundry, a Brooklyn-style gastropub that serves tripel ale, flavoured with pear shojou, ginger and Szechuan peppercorns, on tap. Tseng plans to move back to Toronto eventually – but he will miss his “Wild West.” “[It’s made] life more interesting.”