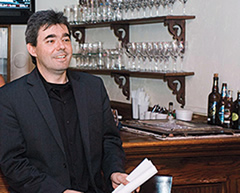 Ad man by day, “beer guy” the rest of the time, Cass Enright (BA 1998 Innis) might just be the most enthusiastic beer enthusiast. He founded the Bar Towel website, full of Ontario craft-beer news and views, and the Golden Tap Awards, which honours bars and brewing achievement in the province. Non-beer drinker Lisa Bryn Rundle tries to understand the passion for malty, hoppy, sudsy brew.

How did you become “the beer guy”?
During frosh week at Innis College, somebody gave me a can of Blue Light. And I thought: This can’t be it…. There’s got to be more.

An idealistic young scholar.
Yes! So I took over the Home Brew Club and renamed it the Innis Beer Connoisseurs Society.

Isn’t drinking beer for the taste a little like reading Playboyfor the articles?
There’s a lot of fun in exploring flavour, and thinking about the history and everything that goes into brewing a unique beer.

How do you define a craft beer?
One that is true to traditional styles. Because small breweries are able to do unique things, they can use interesting ingredients such as fruits, chocolate, coffee and spices to create specialty one-offs and casks. They can make a super-hoppy beer, for example, and sell it right out of their brewery. And they can collaborate with other breweries and homebrewers to make even more interesting beers.

What’s the main difference in taste between a Bud or a Blue and a typical craft beer?
The mass-produced beers tend to be light-coloured, light-flavoured, no aftertaste. Craft beers tend to be the opposite. Beer is supposed to have an aftertaste. Lots of mass beers claim to not be bitter – well, bitter is a flavour you actually want in craft beers.

So would you be caught drinking one of those mass-produced beers?
Oh sure. I’m not a beer snob.

What’s the most heated beer debate you’ve ever had?
Government intervention with how we can buy beer. You can drive to Buffalo and get hundreds of kinds of craft beer from all over, but here there’s a fraction of the choice.

Is that what your campaign and website “Free our Beer” is about?
Yes. I’d like to see private-owned craft beer stores.

Canadian beer culture is still often associated with Bob and Doug McKenzie. Who would you like to see as Canadian beer icons?
The brewers themselves – they are the real characters. And no one person could represent the huge diversity of what’s going on.

You’re being so diplomatic! Pick someone!
How about me? Cass Enright.