Not long after the birth of my third child, I became sick.

As it turned out, I had been walloped by a combination of postpartum anxiety, depression and exhaustion. But at the time, all I knew was that something was very wrong. Sleep eluded me. When I did manage to drift off, I was plagued by nightmares. My energy drained away and I developed tremors in both hands. Worst of all was my heightened sensitivity. My usual protective padding or emotional filter had been torn away, leaving me overwhelmed by the roar of human suffering and pain, and, as a result, nearly incapacitated with sadness and anxiety.

Well-meaning advice – especially of the pious sort – only made things worse. Focus on the positive. Count your blessings. Be thankful you have three healthy children. I knew this intellectually, but knowing it was not enough to penetrate the miasma of fear and dread that enveloped me most of the time. I simply could not make myself feel thankful. Such comments only added a heavy layer of guilt to the burden I was already carrying.

While my doctor experimented with different medications, I tried other means of clambering out of the pit. A friend brought me audiobooks and I listened to them at night in an effort to keep my thoughts from spiralling down fearful paths. I said yes to those who offered to spend an hour or two with my young children so I could lie down for a while. As I got a bit more sleep my mind and body slowly began to settle and heal.

In the fall, my mom came to stay for a week. One day we went to Niagara-on-the-Lake, Ontario, my first outing since giving birth to my daughter in April. We were strolling very slowly down the main street, pausing every now and then to peer in shop windows, when I saw the scarf. Woven from soft Irish wool, in beautiful shades of variegated green, it made me think of fresh leaves in spring. I felt a flash of true pleasure – even joy – in these colours that whispered of new life. Tears welled up, but this time they were tears of thanks because I knew I was still capable of experiencing delight. For the first time in months I genuinely felt grateful.

My mom bought me the scarf. Every time I wore it I was reminded of that sudden burst of pleasure it had brought me at first sight, and how that pleasure touched a vein of true gratitude I had been unable to reach any other way.

What my scarf taught me was the secret of being specific. True gratitude is not a discipline you can impose on yourself. It is a joyful and heartfelt response to grace – and it is often through the most minute openings that grace reaches us.

I have had to learn this lesson over and over again.

A few years ago a friend gave me a mala, a string of 108 beads used in prayer and meditation. She explained that at the end of every day, I should sit down, take the first bead between my thumb and forefinger, and name something in my life for which I felt thankful. At first, this seemed awkward and burdensome, like writing the thank you notes my mom used to insist I compose every time I received a gift or was invited somewhere. For a couple of nights I handled my mala beads the way I had those thank you notes: I zipped through the first few with zeal and good intentions, but then ran out of ideas and grew bored and slightly resentful.

Determined to make my way through all 108 beads, I started naming small things: the first ripe peach of the season; the smell of the coffee beans when I opened the fresh bag; the gentle way the woman on the bus spoke to her little son; the feel of the hot shower on my skin in the morning; the evening breeze through my window; the tantalizing first chapter of my new library book; a particular chord in a song; some lyrics that touched me deeply. To my surprise, one small thing quickly led to another and in no time I had travelled all the way around the mala. After a few evenings of this I realized that I actually felt happier and more content.

Once again the secret lay in being specific.

Specific things are the sparks that ignite the flame of heartfelt gratitude. We just have to practise looking for them. Thankfulness is an attitude that can be cultivated, a way of seeing the world and our own circumstances in a way that is attuned to those tiny glimmers of grace. 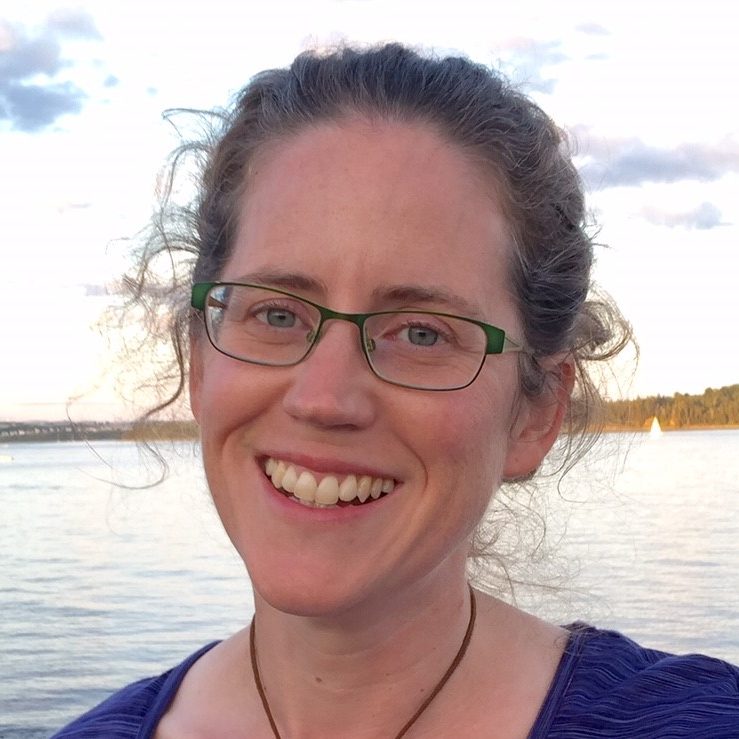 So when I sit down for a meal with my own family, or gather with the children of the church where I work as an educator, we take time to think about and name aloud one small thing that brings us joy. Be specific, I urge. So they are: I’m thankful that my grandpa said his first word after his surgery; I’m thankful for my dog; I’m thankful that I got to pick the paint for my new room; I’m thankful for that big puddle in the schoolyard; I’m thankful that my friends from my old school are keeping in touch with me. Together we are learning the truth of this simple statement from The Secret of Saying Thanks by Douglas Wood: “We don’t give thanks because we’re happy. We are happy because we give thanks.”

Not long ago I gave each of my children a mala. While I would not call it a key to happiness, it is one tool that I hope will help them practise looking for those small and specific things – one step to becoming genuinely thankful people.

And yes, I make them write thank you notes.