Markian Moyes (BSc 1999 New College) is remembering how he felt when he graduated from U of T with his double major in hand – English and computer science. “I was like, ‘I will never be able to find something that combines these two things,’” he jokes. “I was wrong.”

Moyes makes book apps for children – almost the perfect marriage of the two subjects. A book app isn’t the same as an eBook (print transferred to a screen). It’s a story that unfolds as you swipe and tap and choose – as you interact with the screen, explains Moyes. “It’s more than tapping the cow and the cow goes ‘moo,’” he says. “Book apps allow you to build some intelligence into the storytelling. So you might offer the cow grass, and it comes over and you see there was a gate behind it that you can go through to get to a different part of the story. Or if you run into the cow again later in the story, it might remember and treat you differently.”

Moyes’ first creation, Loose Strands (available for iPad and Android tablets), came out last winter to critical praise, and he has a second in the works.

Loose Strands is the tale of Roland, a nine-year-old boy who lives in a very strange barbershop. And with that scene set, the reader must make a decision: Roland, who has been disappointed on his birthday many times, hears the faint strains of “Happy Birthday.” Does he race to find the source of the music and risk being let down again? Or does he pretend he can’t hear it?

Either decision will have consequences – not only for the path the story takes, but also for the choices you are offered later. “For example, if you decide that he’s not going to run towards the music, then Roland becomes a slightly more trepidatious character later,” says Moyes. “The descriptions of what he’s thinking and doing are different.” Unlike the Choose Your Own Adventure Books that Moyes loved as a kid, there are no dead ends that cut you off early in the story. Whatever twists and turns you take, you get a full book and a satisfying ending, he promises.

Moyes and his team, which included illustrator Jeff Frizzell and three animators, spent about a year and a half creating the app. Moyes spent months mapping out the storylines, then months more writing code. 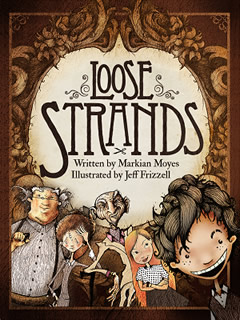 But making the app was the easy part compared with getting it reviewed. “There are really not that many places that will write about or give awards to interactive fiction,” says Moyes. Literary awards organizations haven’t created app categories yet. Still, Loose Strands won a Digital Book Award in January 2015, and landed a coveted star from Kirkus Reviews, who enthused: “The writing is wise and witty, even Snicket-y. By its final sections, when stakes are highest, the way the app balances an engaging interactive experience with a deep narrative becomes truly impressive.”

“It’s exciting,” he says. “It engages both sides of my brain – which would otherwise start to yell and get mad at me if they weren’t being used. I feel really lucky that I’ve been able to merge them.”

Watch: Discover Roland’s world in the trailer for Loose Strands