She’s been on the stage from the age of 10, but improvising on the spot used to put Madeleine Bisson in a cold sweat. “I was terrified of improv,” says the recent University College grad (BA 2012). “I cannot believe that I’m in a movie based so heavily on it!”

In her first screen role, Bisson plays Rita O’Hagan, one of the leads in ensemble drama Foxfire: Confessions of a Girl Gang. Directed by Palme d’Or winner Laurent Cantet, the film was adapted from the Joyce Carol Oates novel about a group of rebellious teens in 1950s upstate New York. Foxfire premiered at the Toronto International Film Festival on September 10 and 11, 2012. And improvised scenes account for about 50 per cent of the film’s length.

Landing such a prominent role – before she’d even graduated – was down to her training in the UC Drama Program, says Bisson. She praises the melding of academic and hands-on classes, which include voice, movement, and performance instruction. “I dedicated Foxfire to my teachers at U of T,” she says. “The reason is the improv training..” 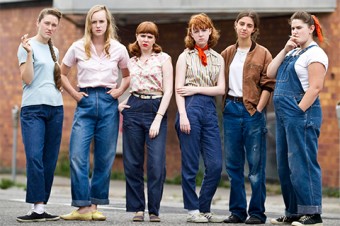 Under the tutelage of instructor Ken Gass (who also founded both Canadian Rep Theatre and Toronto’s Factory Theatre) Bisson learned the finer points of extemporization. “Before, when I’d conjure up an idea of what improv was, I’d think of comedy,” she says. “I thought it was all like Whose Line is It Anyway? He taught us that it’s not about being funny, it’s about being in the moment. He told us to talk, to fight, to swear, to feed off of the energy of being present. Sometimes I would mess up, but that’s the wondrous thing about the program: it’s small, it’s a safe environment, and it’s OK to fail.”

During the open-call audition for Foxfire, hopefuls talked about themselves and completed a five-minute improvisation about getting expelled from school. The skills which Bisson honed in her classes — the ability to listen and react — helped her to land Rita. “I spoke the least in that audition,” she says. “That’s probably why I got the part. A lot of people tried to pack as much in as they could, but I was ‘acting real.’”

And the result has been real success, a triumph Bisson is happy to share. She’s delighted that some of her former professors and classmates will attend the TIFF screenings. “I have over 60 people coming; I feel like it’s my wedding,” she says. “I’m very lucky.”