For 17 years, alumna Kerry Clare (BA 2002 Victoria, MA 2007) has been blogging about books and her personal life at Pickle Me This. She recently released her first novel, Mitzi Bytes, about a writer who maintains a secret blog documenting the lives of those around her – doled out with just a tetch of judgment. It serves her well until an anonymous emailer threatens to expose her. The novel explores issues of identity and the corroding power of secrets – and it’s also an excellent hat tip to “difficult women.”

Your novel is an homage to Harriet the Spy, the children’s novel in which Harriet writes about everyone she knows in a secret notebook – and then the journal falls into the wrong hands. Not coincidentally, your eldest daughter is named Harriet. Why do you love this book – and this character?

My favourite thing about Harriet the Spy is that it’s about a girl who doesn’t change at the end. She does apologize, but she doesn’t ever mean it. I wanted to write a story about someone who doesn’t bow down and grovel. 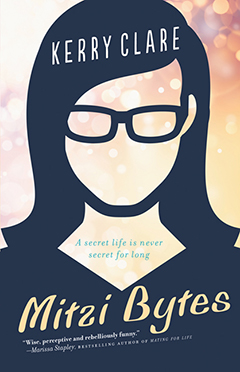 Harriet is a very unconventional character. She’s not a typical girl. She’s not polite. Not everyone likes her, but she likes herself. I love that about Harriet. I wanted to write a woman character who likes herself, which – in literature and in the world – we don’t see often. And I wanted to complicate the idea of being nice. I think we need to make more room for difficult women!

There are surface similarities between you and the main character, Sarah: You’re both bloggers, wives, mothers to two daughters and in your 30s. What are the differences?

I’m an open book – and would be even if I didn’t have a blog – and she is not. One of her main issues is that by blogging under a pseudonym, she tries to have different selves and keep them apart. The reconciling of that is what she’s working through.

I have found her very inspiring because she’s not like me. She a little bit nervier and less worried about people liking her. I’ve found I’ve been more courageous in expressing a point of view. I think, “What would Sarah do?” It’s made me bolder and I’m grateful for that.

The book asks powerful questions about identity – both online and offline. Why does the theme fascinate you?

How do we understand anything – including identity – when it’s changing all the time? Virginia Woolf wrote about the challenges of capturing reality in words. I think that the Internet adds another facet to this; there’s a whole other stage for us to exist on, and so it complicates things. But I think online identity actually brings opportunities for people to define themselves rather than having other people define them from the outside.

That is a positive thing; one of the teens in your book said guys listen to her when she’s online and it wasn’t about how she looked. It’s so easy to see the Internet as wholly terrible, particularly in terms of catfishing [assuming a false identity online] and trolling.

Motherhood factors prominently in the book and on your blog. You’ve also edited the anthology The M Word: Conversations About Motherhood. Why is it so important to you to address stories about being a mom?

I think it is because I’m a blogger. I think of my blog as a giant tote bag. I just throw everything in it. For me, everything informs other things in such interesting ways, and that’s the story I have to tell.

Motherhood also raises so many interesting political and social questions. In Mommyblogs, May Friedman writes about parenting blogs as a really radical space – about how what’s really great about them is the noise. These blogs are hard to grapple with because everybody is disagreeing with each other and there’s all kinds of infighting but basically it is women who are all saying different things in different voices. And that doesn’t happen very often.

Also, there’s this idea that some stories from women’s lives should be off-limits because they’re writing about their children who don’t have a choice or a say in how they’re being portrayed. Sarah writes against this idea on her blog, and I feel the same way she does. I don’t think that’s a fair assessment. It’s another way that women are being told to shut up. I think that the answer is finding a balance, but to suggest that a woman with children isn’t allowed to tell her story seems really wrong to me.

What writers influence you the most in terms of your style?

Carol Shields is a really important writer to me. I feel as though her work is encrypted in my DNA now. I loved Small Ceremonies, her first book, and Unless. I just love her. I reread her often.

Another really important writer for me is Laurie Colwin. She died in 1992 and she wrote these really weird books that were funny and light but, also, she was writing in the New Yorker. She wrote about women in ways that, I think, challenge our ideas of how women should be in novels. The women in her books were adulteresses. They still loved their families, but they were women who made mistakes and transgressions. The books aren’t formulaic, they disturb our ideas of how women in books should be, and they’re also funny and smart.

I also really love Maria Semple, who wrote Where Did You Go, Bernadette? It’s so good. I read it the night after I had a baby and it was the greatest night of my life. I was immobile after a C-section with a newborn. It was incredible.

How did you manage to read!?

Well, the baby wouldn’t go to sleep. I would have gone to bed if I could. But every time she woke up, I got to pick up that book again.

There are many examples of well-known bloggers publishing non-fiction books, but fewer publish novels. How do you straddle those two worlds?

Well-known blogger is an oxymoron. (laughs.) Someone recently referred to me as a blogger, and then someone else said, “Aren’t you a novelist now?” Blog is a really ugly word, just in terms of the way it sounds – it’s gross – but I’m always going to be a blogger. That’s my roots. What made me a writer was the fact that for years, I’ve sat down and wrote things on my blog, and it showed me what my voice is and so I think that my fiction writing has been informed by my blog writing.

When I wrote my novel, I wrote it in small bits. I broke it down into that kind of project that I was used to for my blog, and that’s why I was able to do it. I wrote most of it over three months. When my smallest daughter was one, and the other one was five, I decided to commit to 1,000 words a day. I wrote it while my baby napped.

What do you hope readers take away from your book?

I hope that they, too, come away thinking that making space for difficult women is important rather than thinking, ‘I didn’t really like Sarah.” And thinking that people who complicate things are important – and good for all of us.