Ben and Larissa Bathgate  (nee Schneider) met while undergrads at University College and, after several years of a long-distance relationship, they married in 2006. Ben (BA 2001 UC), a former president of the University College Literary and Athletic Society, is now a lawyer at Lang Michener LLP. Larissa (BA 2003 UC), who majored in performance at the University College Drama Program, is a singer in Toronto’s musical theatre scene. 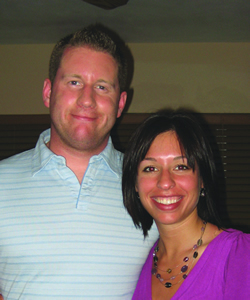 Ben Our first meeting is hard to forget. I had just entered my fourth year of a BA in peace and conflict studies, and had volunteered to be a Frosh leader. During orientation, I led a group of first-year students to the SkyDome for a Blue Jay’s game. I was wearing the obligatory blue body paint and playing the part of the overzealous Frosh leader in the stands when the Blue Jay’s mascot, Diamond, joined the fracas. My blue skin turned a shade of red when Diamond sat on my lap and heaped affection on me, before she walked away with a wave of her feathered wing and a wink of her animatronic eye. A few days later on campus, “Diamond” introduced herself sans the big blue bird costume, and the human side of the romance began.

Larissa Ben and I never seemed like the perfect match. He was the logical, pragmatic lawyer-in-waiting; I was the musical theatre enthusiast. He loved sports; I was passionate for the arts. Sometimes I wonder whether our relationship was built on the complimentary baseball tickets that I received as the Blue Jays bird. After graduating, Ben moved to Halifax, then Germany, and I often stowed away in his luggage. We watched our differences become assets, and learned to covet them. As we backpacked through Europe while Ben was on exchange at a law school in Germany, Ben was the exacting tour guide, whereas I was the eager interpreter. His yin to my yang, his Sonny to my Cher or something like that. And now we’ve learned to share everything – including a mortgage.

Tags: , The Two of Us, University College