Hana (BA 1977 Victoria, diploma in child study 1982 OISE): When I first met Donald at U of T in the ’70s, I thought he was very smart and handsome. It became clear to me that he was a long-term investment. He’s not the kind of guy you have doubts about. He made me laugh every day – and still does. We became teachers but there were no jobs in Canada, so we moved to southern California and stayed for 27 years. We worked together with special-needs and high-risk students, and it was nice to have someone who understood the stress.

After the Iron Curtain fell, we were able to visit Prague, where I was born. The first time we crossed the border in 1990, through what used to be a mined no man’s land, it was very emotional for me. It was very special to share that with Donald. We’ve been back many, many times. Now that we’re retired, there are many more adventures we want to have together. Relationships change over time, and you have to adjust. A sense of humour doesn’t hurt. I would recommend marriage to anybody.

Donald (BA 1978 Victoria): When I first saw Hana, she was really pretty – and she still is. We met in the E.J. Pratt reading room, and then again in the Vic Pub and I realized that she was fun, smart and just really nice to be around. We lived together for a year before getting married in August, 1979 – which may have been Hana’s idea. She has a way of motivating me. 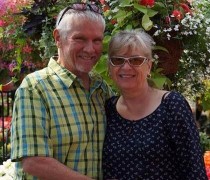 We’ve been married 35 years and we do almost everything together. We ski together, we bicycle together, we travel together and we read the same books. We have very few disagreements, and it’s easy for us to compromise. More than anything else, she’s my best friend. We don’t have children – and that’s been very hard. But that’s one of the reasons we’ve been able to live a bit of a crazy life. There are silver linings to everything. We retired two years ago, and we’re building a house near Gananoque, Ontario close to where I grew up. We also have a place in the Czech Republic. So we’ve both been able to come home.

Tags: , Ontario Institute for Studies in Education (OISE), The Two of Us, Victoria College