Deborah: Wayne and I were both elected to the Engineering Society on a split ticket. I was ready to resign because I thought the guys on his ticket were bozos. At the first meeting, Wayne and his VPs – Vince Volpe and Peter Weick – showed up with a super-long cardboard tube just wide enough to hold a beer bottle. 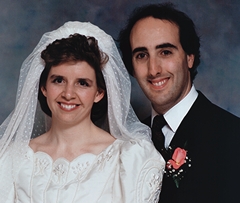 The fresh ones came out one end and the empties went in the other. I thought, ‘Are you kidding me?’ But, in the end, they were more serious than they came across, and we worked well together. We launched an accessibility ramp at the Medical Sciences Building, started sexual-harassment and discrimination proceedings, and protested the inadequate computing facilities. And I really love Wayne’s sense of humour. I am way too serious, and he makes me laugh.

Wayne: Everybody was shocked to see us together – even when we got married. But we’ve been married for 23 years. It’s not so much an achievement for me, but definitely one for Debbie. She prefers to be home and doesn’t like to travel, but I like to go places and Debbie doesn’t hold me back. Absence makes the heart grow fonder and I need all the help I can get. Luckily there have not been many large and enduring conflicts, but one area where our differences flared up was with our kids’ music lessons. Our children are Alec, 20 (who is studying sciences at U of T), Emmett, 16, and Rebecca, 12. Debbie wanted a particular instructor, but it was very difficult to get the kids from school, fed and downtown to the Toronto Suzuki Studio. I argued that we look into lessons conducted over the Internet to save a ton of energy. Debbie prevailed and good thing she did; our kids all play very well and they are a delight to hear.