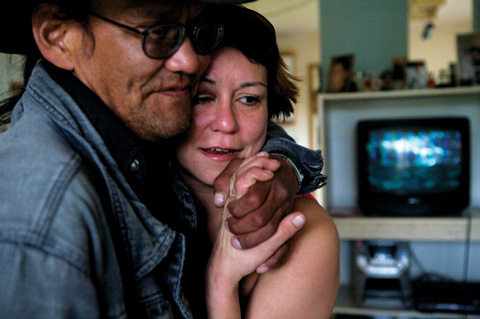 Talking to Rita Leistner is like attending a photography class. Ask her what makes a good picture and she’ll answer abstractly at first, with a casual reference to philosopher Roland Barthes. When she pulls out examples, however – an issue of Canadian Geographic, say, or a monograph by British photographer Martin Parr – things get very specific very quickly. “This is a beautiful photograph but it has no perception or personality to it,” she says, stabbing at a drab cover shot of the Mackenzie Delta. “It’s the most ordinary picture imaginable. They haven’t even waited for the light to be interesting. It doesn’t go through your eye and hit your brain and your gut.” She opens the Parr book and, with considerably more excitement, points to an off-kilter image of some Walmart employees. “Most people wouldn’t see a picture there,” she says. “But it wouldn’t be a picture without the composition, without the harshness of the flash, the tone in the sky that allows these figures to pop off this bland background.”

In just a few hours, I learn how flash can emphasize the presence of the photographer, the best way to approach a suspicious subject, how lonely the life of a photojournalist can be. Leistner, who’s 45, talks about these things the way she talks about everything – with uncommon candour and the jumpy intensity of someone who’s spent a lot of time in war zones. The first time we meet at her penthouse condo in Toronto’s Little Italy, she’s dressed in beige linen pants and a youthful Paul Frank tank-top that reveals, thanks to a lifetime of lugging camera gear (and a dedication to exercise), a bodybuilder’s biceps. Her feet are bare. Her stories – she’s got a lot of them – are punctuated by an exuberant, barking laugh.

Leistner is one of Canada’s foremost photojournalists, and has contributed to Time, Vanity Fair, Rolling Stone and the Walrus, among other well-known publications. While she didn’t start taking pictures professionally until she was in her late 20s, her East German father was a devoted amateur shutterbug and instilled in her an early affection for the medium. “Photography has always been a part of my life,” Leistner says.

Born and raised in Scarborough, she later studied comparative literature at U of T, earning an MA in 1990. After grad school, she worked in film as a lighting specialist for six years. Frustrated by the chauvinism of that world, she decamped for Cambodia in 1997, becoming an independent photojournalist and staying for a year-and-a-half. In 2000, realizing the need to hone her largely self-taught skills, she enrolled in New York’s prestigious International Center for Photography. There, she learned about Cornell Capa’s concept of “Concerned Photography,” and her subsequent work focused on particularly forbidding – but also particularly arresting – subjects and subcultures: American women wrestlers; female patients at Baghdad’s al Rashad Psychiatric Hospital; Iraqi gravediggers and detainees; crack addicts on Vancouver’s Downtown Eastside. She won three National Magazine Awards and co-authored a book called Unembedded: Four Independent Photojournalists on the War in Iraq. Teaching gigs, exhibitions and lectures soon followed. New York served as her home base for eight years.

It’s an exhausting c.v. even to contemplate. But for all of her accomplishments and despite the exhilaration of the work, Leistner was unsatisfied. “I became a photographer because I wanted to lead many lives,” she says, paraphrasing Susan Sontag. But Leistner had grown weary of a life chasing assignments from editors that paid too little and, in her view, were not worth chasing. This was compounded by a growing sense of personal crisis. Being a photojournalist demanded that she be constantly open and exposed, but, paradoxically, extremely alone. “I spent many nights crying, frustrated, tired and lonely,” she says. Fear was a constant, as was alcohol. Relationships floundered. Her work started to suffer. While dismissive of the swashbuckling war photographer stereotype – “I did that work despite the adrenaline,” she says – Leistner realized that she was becoming a cliché.

She was saved from that fate by Edward Curtis. In 2005, she passed up a fifth trip to Iraq and returned to Toronto to get sober. Soon after, she began developing, with playwright Marie Clements, a unique multimedia work called The Edward Curtis Project. The project fuses Leistner’s photographs of native communities (from Arizona, New Mexico, Haida Gwaii, Vancouver and the Arctic) with Clements’ tale of a contemporary Métis journalist (Clements is herself Métis-Dene) who travels a century back in time in order to interview Curtis about his controversial photographs.

Most famous for his landmark, early 20th-century study, The North American Indian, Curtis sought to comprehensively document the 80-odd Aboriginal Peoples populating the continent, from the American border with Mexico to Alaska. Over 30 years, he amassed 20 volumes of work, each containing 75 hand-pressed photogravures (a kind of photo-based etching) and 300 pages of text (he also made thousands of wax recordings of speech and music). His iconic photographs – he produced more than 40,000 throughout the lifetime of the project – are now as familiar as any by Ansel Adams or Edward Weston.

Leistner was herself eager to photograph native communities but also to investigate the complicated notion of colonial photography that’s part of Curtis’s legacy. Curtis’s detractors have long criticized him for his romanticism, nostalgia and manipulation: he occasionally demanded, for instance, that his subjects wear traditional dress when they had stopped wearing such regalia years prior. Leistner is entirely familiar with these objections, but is more forgiving. “There are so many ways of seeing Edward Curtis’s work” she says. “It can be seen negatively from a methodological point of view, but he shouldn’t be criticized retroactively. Curtis was a portraitist, not a social activist.”

At the same time, she was wary of repeating any of his mistakes. “How could I photograph Aboriginal Peoples,” she wondered, “without repeating the appropriations and objectifications of colonial photographers and ethnographers?” But her goal, all the while, was simply to show the richness and variety of aboriginal life on this continent. As she points out, there are actually very few photographic representations of this life and what there is tends to focus on misery and poverty in those communities. “It’s an unconscious conspiracy to ignore what’s really going on in native communities,” she says. “The stereotypes and prejudices about Aboriginal Peoples in Canada are undeniable. People don’t know anything about them because we don’t get any information.”

By illustration, Leistner walks me through the pictures from her most recent trip to the Northwest Territories. The dozens of images depict a landscape and lifestyle that’s both alien and familiar: a muskox hunt on the tundra, a church in first snow, a deserted skateboard park, an elderly woman joking with her beloved sister. Some shots are direct homage to Curtis: portraits of clam-diggers, or diptychs that show individuals in both street and ceremonial dress. Her Parr-like use of flash and a keen eye for the absurd – a slaughtered muskox, for example, its flesh neatly wrapped up in its own fur, might be a giant wig – render these images strange, poetic and singular.

With initial funding from North Vancouver’s Presentation House Theatre (which will premiere The Edward Curtis Project just before the 2010 Winter Olympics), Leistner spent a year taking pictures. But she soon realized that this wasn’t enough; the subject was too compelling, too enormous, too personal. She spent $8,000 of her own money to revisit the Arctic and the friends she now had there. She took thousands more pictures and plans to take more over the next few years. “It’s become part of my story,” she says, “as a documentarian and as a human being.”

Once the play ends in January, the photographs will continue to have a life of their own. Leistner is planning future shows and, she hopes, a book. She gave a guest lecture and slide show at Victoria College in 2008 and has been asked to return next fall as an instructor. For the time being, she has little desire to revisit conventional photojournalism. “I use my camera to make art,” she says. “I’m not trying to create an exact replica of what I see. I’m trying to affect what I see through the tools of photography. So people will look harder.”

Jason McBride writes about pop culture for Toronto Life, the Globe and Mail, the Believer and many other publications.

Test your knowledge in honour of the university’s anniversary on March 15!