“Mommy, where do babies come from?” Every parent knows the surge of anxiety that comes with trying to answer that question. What do I say? How much do I say? 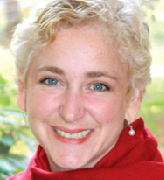 Psychologist Jillian Roberts, who has three young children of her own, found it difficult to explain the birds and the bees to her eldest daughter without “describing too much.” And when she turned to books for help, there was nothing basic enough for her curious six-year-old.

So Roberts (MEd 1996) developed an app to educate children about their bodies. The Facts of Life app – which is now available for download on iOS and Android tablet and mobile devices – is geared to kids aged four to eight, and gives them “a beautiful way to visualize how their lives began,” she says.

The app reveals “just enough” about conception, such as illustrating how a man and a woman fit together like puzzle pieces. The intent is to lay a foundation for more sophisticated conversations down the road. Parents can draw upon information that already makes sense to a child, such as the jigsaw puzzle analogy. “When they come with more questions, you can go back and ask, “Remember the puzzle pieces? Well, that’s called intercourse,” says Roberts, a professor of educational psychology at the University of Victoria.

“You control the pacing,” she says. “A child may not even want to know more at the time. Users can opt to get more information or stop if they want to revisit the topic at a later date.”

Although the app makes use of graphics and music, Roberts opted out of using a voiceover so that parents can read to their children. After all, the app is not meant to replace the parents, she says. Parental involvement is a starting point for healthy sexual development – and by going through the slides together, kids will learn that it’s okay to approach their parents when they want to ask questions about something they heard on the playground.

In December 2013, Roberts launched a Chinese language version of the app. She hopes that the symbolic and wholesome nature of the app will appeal to families with diverse cultural backgrounds. Rather than having a “big, embarrassing talk” – or no talk at all – they can educate their children about sex without being unnecessarily explicit, she says. “There is a need for culturally sensitive ways of talking about sexuality.”

Roberts started her career as a special education teacher, but it was during her graduate studies at U of T that she realized her true calling: child psychology. After many years of clinical practice, she noticed a shift in how children relate to and access information. “These days, children have replaced books with their mobile devices,” she says. “But if they type ‘sex’ into Google, they aren’t going to get very age-appropriate information. So I thought, ‘How can I use this as a tool to help them learn?’”

With concept maps for three additional apps, Roberts wants to target the adolescent age group next. “Parents who were uncomfortable with the ‘first talk’ will need support as they delve into deeper discussions,” she says. “It’s important that we continue the conversation so our children can stay empowered and safe.”