The University of Toronto’s historic Boundless campaign has reached yet another milestone, breaking fundraising records for the university and higher education in Canada. In the most recent fiscal year, which ended April 30, campaign donations totalled $248 million. Together with new contributions received since then, the campaign has now raised $1.83 billion toward its $2-billion goal.

Donations over the past year are supporting innovative programs and cutting-edge research across each of U of T’s three campuses. An unprecedented $130-million donation announced last November from the Rogers family through the Rogers Foundation established the Ted Rogers Centre for Heart Research. Shared between U of T, the Hospital for Sick Children and University Health Network, the gift set a new record for Canadian philanthropy. Among other recent gifts celebrated in the past year were three generous contributions totalling $20 million for initiatives that benefit indigenous peoples.

At this year’s Spring Reunion, which saw record-breaking attendance, U of T President Meric Gertler highlighted the importance of alumni support, and academic and volunteer leadership, to the campaign’s and university’s success. “The Boundless campaign is continuing well ahead of pace, thanks to tremendous support from 90,000 unique donors among U of T’s alumni, friends and community who share a belief in the importance of supporting post-secondary education, our programs, faculty and students,” said President Gertler. “This achievement has also been made possible by the hundreds of volunteers across our three campuses, who work closely with our scholars and staff to advance our most important academic priorities.”

David Palmer, vice-president of Advancement, noted that the Boundless campaign is fostering record levels of engagement across the board, including both giving and alumni programs. “Giving is fundamentally about change. That so many of our alumni and friends have chosen to prioritize U of T in their giving is a huge vote of confidence in the power of higher education to create the world we all imagine for ourselves, our children and our communities.” 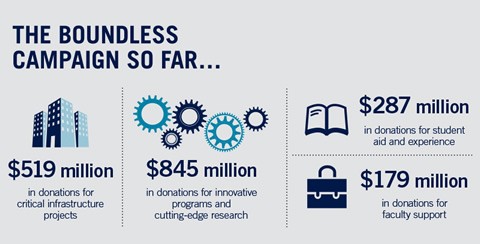