In 2010, a council of 15 elders resolved to find out why so many members of their community of Northwest Angle 33, a First Nation near Kenora, Ontario, were dying of cancer. Could it be something in the environment? Today, seven years later, the council has lost nine of those 15 elders, all to cancer – and there are still no answers. But that may be about to change.

In partnership with the Kenora Chiefs Advisory, researchers at the Waakebiness-­Bryce Institute for Indigenous Health, at U of T’s Dalla Lana School of Public Health, have been analyzing data from statistics, environmental samples and people’s family stories. Now, with enough evidence to justify proceeding, they hope to take their research to the next phase: taking blood samples to measure environmental contaminants in people’s bodies and genetic biomarkers for disease.

“We’re very hopeful now that we’ll finally get answers,” says Norma Girard, a consultant and land manager for the First Nation. “People need to know: is our community safe?” Girard, who has lost a father, an aunt and friends to cancer, has been helping researchers from the Waakebiness-Bryce Institute by knocking on doors and collecting information for the study. She estimates that over the past 20 years, up to half the people who have lived at Northwest Angle 33 have contracted the disease, usually in the bladder, stomach or colon. One report found that of 20 longtime residents, 17 were undergoing cancer treatment.

The band has about 500 members, with 120 living at the primary residence of Northwest Angle 33. The Lake of the Woods inlet in northwestern Ontario was once the place where black spruce logs, awaiting transfer to a Kenora pulp-­and-paper mill, were stored in booms, possibly leaching toxic methylmercury into the lake. It’s also the place where workers brought electricity to the area in the 1960s through underwater cables and buried transformers, which can contain carcinogens.

The community’s main sources of water are wells that run off two portable treatment plants. But in February 2016, Health Canada identified high concentrations of radioactive material in the water system and issued a “do not consume” order, more serious than the previous boil-water advisory. The community now receives bottled water for drinking, but many residents still cook and bathe using local water.

Health Canada provided $200,000 for the first phase of the U of T study. It’s critically important the research continue for two reasons, says Howard Hu, principal investigator and dean of the Dalla Lana School. “First, it responds to concerns from the community, and second, it relates to one of the scariest issues that communities all over the world face: is there an epidemic of cancers, and could they be related to what we’re eating, drinking or breathing?”

Although it’s small, Northwest Angle 33 is of critical historical significance. It was here that Treaty 3 was signed in 1873, allowing the Canadian government access through Ojibwe territory to build railways, roads and canals. “There wouldn’t be a Canada without Northwest Angle 33,” Girard says.

The study team includes a co-ordinator from Northwest Angle 33, as well as researchers from Cancer Care Ontario, Environment Canada, Public Health Ontario and Toronto’s St. Michael’s Hospital. The Waakebiness-Bryce Institute teams up U of T scholars with community partners and Indigenous Peoples to address the complex factors that underlie health disparities between Indigenous and non-Indigenous people. 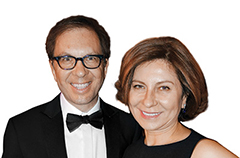 Michael and Amira Dan
Michael Dan and Amira Dan’s visionary gift of $10 million to U of T in 2014 established the Waakebiness-Bryce Institute for Indigenous Health at the Dalla Lana School of Public Health.