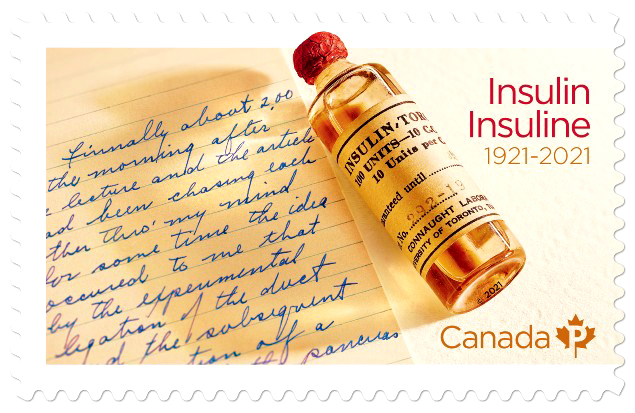 This Canada Post stamp, unveiled in April, features an excerpt from Frederick Banting’s unpublished memoir and an original insulin bottle with its distinctive red cap. U of T researchers Scott Heximer and Patricia Brubaker worked with Canada Post and the Banting House National Historic Site to ensure the stamp’s historical accuracy and help source archival material.

A Heritage Minute film, released in May, follows the journey of a young Leonard Thompson, who would become the first diabetes patient to be successfully treated with insulin – at Toronto General Hospital.

The decision to highlight the story of a single patient stemmed from a desire to emphasize the human element of the Nobel Prize-winning discovery, says Christopher Rutty, an adjunct professor at U of T’s Dalla Lana School of Public Health and one of three historical consultants on the team that created the 60-second clip. Alexandra Carter, science and medicine librarian at U of T’s Thomas Fisher Rare Book Library, says she was struck by the historical accuracy of the film’s visual details. “We have photos of the lab; it’s this shoddy-looking, cluttered space,” Carter says. “I love that they put that in.” 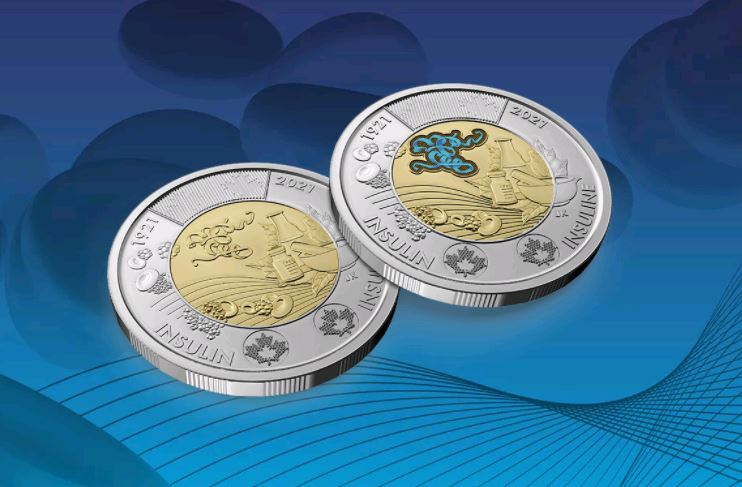 The Royal Canadian Mint issued a commemorative $2 coin, or “toonie,” in July. Designed by Ontario artist Jesse Koreck, the “tails” side of the coin features the laboratory tools – a vial, flask and mortar and pestle – that were used in the early formulation of insulin. The coin’s artwork also includes representations of the insulin molecule, red blood cells and glucose. A second version of the coin shows the molecule in blue – the same colour that is used to raise diabetes awareness.

Do you have a personal story about how insulin has helped you or someone you love? Share it with us in the comment box at the end of the story, or send an email to uoft.magazine@utoronto.ca