Lindsay Zier-Vogel (BA 2005 VIC, MA 2007) has written 1,100 love poems – and has left every one for a stranger to find. It all began in 2004 when the U of T student, writer and artist tried a poem-writing exercise in the park with a friend and on a whim, decided to leave the results behind. “We hid them in phone booths, and in magazines, and in a bin of cherries. It was so much fun,” she says. The next year, she wrote poems about books and hid them in Robarts Library. (A PhD student turned one up in 2012.) In 2012, with the help of a $1,000 grant from the Awesome Foundation, she set up booths across the city, inviting people to share what they love about Toronto – on paper, and secretly, with strangers.

Zier-Vogel left her latest poem at Victoria University in late September, but she won’t check to see if it was found; she never does. “Potential excites me like nothing else,” she says. “Of what might happen or who might find it. I love that ‘who knows?’ aspect.” 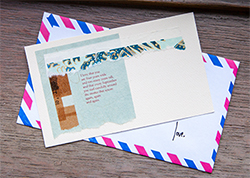 I love that you
are four years wide
and too many years tall,
and that every September
you curl carefully around
the stories that return
again, again
and again.