U of T students hail from 168 countries, so it is not surprising that these polled students speak 28 languages among them. The most popular, outside of English, are Mandarin (28 per cent), French (16 per cent) and Hindi (7 per cent). Other languages range from Konkani to Russian and Vietnamese. Besijani Mati, who studies math and statistics at Trinity College, speaks an impressive four:  “My native anguage is Albanian…and most of the TV I watched in Albania was in Italian, so I just acquired the language.” She also studied French, and learned English upon moving to Canada.

Esther (who asked that we not include her last name) is studying international development and French. She is of Burundian descent, and speaks four languages. Like her parents, she speaks English, French and Kirundi (the official language of Burundi, Africa) – then was inspired to learn Mandarin by Toronto’s diversity: “You’re able to understand more about a culture when you learn its language.”

This highly unscientific poll of 100 U of T students was conducted at Sidney Smith Hall on St. George Campus in July.

What four students had to say: 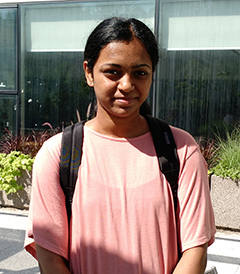 I was born and raised here. My parents are from Sri Lanka so they introduced me to Tamil. English I learned here at school. French I took throughout school. I have friends who only speak English, and they say, “Oh, you’re lucky.” I wish I could speak a minimum of five because it just breaks down barriers. 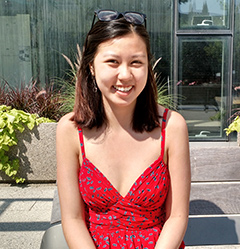 I was born in Vietnam. I lived in the States for a few years, so I learned English when I was five. We moved back to Vietnam, and I went to the international French school. We immigrated to Canada when I was 11, so I knew three languages by then. 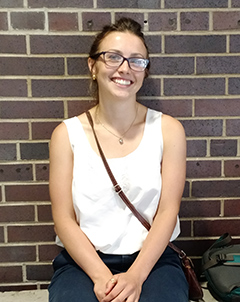 When I worked my first part-time job in high school in Ottawa, I needed to know some basic French to communicate with certain customers. My dad is Nicaraguan and speaks Spanish. My mother also speaks Spanish, but they never spoke it with me, so I haven’t learned it fully yet. That’s a big communication barrier for me and my dad’s side of the family. 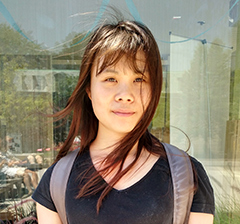 My parents sent me to an international elementary school, where I learned English. Mandarin and Taiwanese are my mother tongue. I feel English is convenient because it’s just very straightforward and logical.